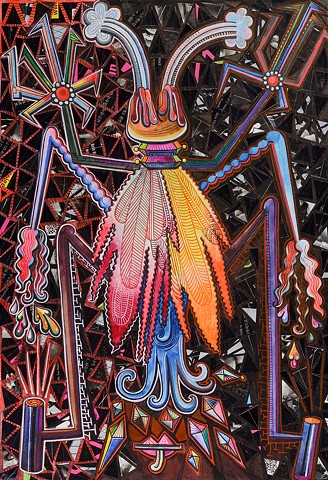 It is an insect that lived in the magma. It came into the world when the volcano erupted.

In accordance with the message, “As you came from magma in the Beginning, so shall you go back to it,” it lives off the human throat that resembles the volcanic vent.

Its mutations are continually being discovered. Human civilization has evolved along with cold medicine.

- From the two volcanoes sticking out of its head, a hot and nasty smoke rises. - With a leg that looks like a rake, it grasps the person’s tonsil or clings to the larynx, as not to slide along with the saliva and food going down the throat, or the inhaled air passing through to the lungs. - On the rake are the eggs of the cold bug. They infiltrate through the scratches created by the rake on the throat. - The brownish lava with high viscosity spills out from the middle leg. - On the hind leg, there is a hammer attached, and it whirls around, incurring injuries. It seems like with the kinetic energy produced by the hammer when it strikes the throat, it is able to maintain its volcanic activity. - From the wing known to have degenerated, fire occasionally is set ablaze. - Its anus releases the fire ashes.