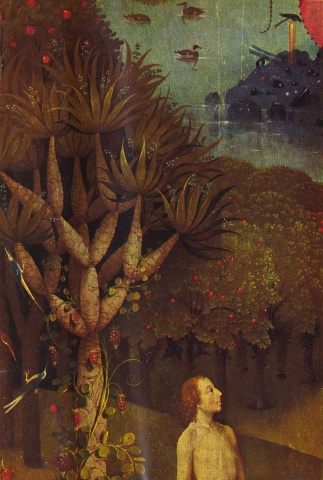 The Garden of Eden
next >

1. The Garden of Eden Eve picked and ate the fruit of the Tree of Knowledge of Good and Evil. She believed the serpent's lure that if she eats the fruit, her eyes would be opened and by that she could be like God. A seed of desire, that was the mother of all desires, sprouted in her mind. She wanted to be God. She wished to distinguish what is Good and what is Evil. Her desire made her completely forget the warning of God. She ate the fruit, and her husband Adam also swallowed it by the desire not to lose his wife's love. However, they could not be like God. They did not know the way of distinguishing Good and Evil. The only thing they realized was the fact that they had been naked, that means they became aware of their skin. The desire gave them the skin. The skin is the curse of God. According to Big Bang theory, the universe that we understand now was formed by an unthinkably huge explosion. The universe was a small particle, but a minute wave made it explode and expand until now. The lump of desire was formed in the same way. The sound wave of the serpent's sweet voice stimulated Eve's ear, and exploded what is now called "the desire." Since then, "the desire" has expanded with enormously fast speed. I think it could be possible that our desires are the energy that expands the universe. Everybody in the whole world goes to the Garden of Eden to pick and eat the fruit of the Tree of Knowledge. As their ancestor did, they eat the fruit to be God who knows the essence of the world, the appearance of the netherworld, and the places that the most valuable treasures are hidden. However, people cannot find or attain anything at all. Despairing over and over again, people go to the Garden of Eden to have the fruit. Tonight I also took a bite of the fruit to write a good artist statement. As the punishment of eating the fruit, God imprisoned us in the cage of desire, "the skin." God doesn't want to have rivals. God will never set us free.