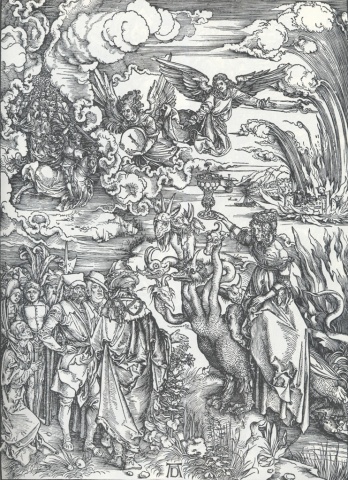 Apocalypse: The Whore of Bablyon
< previous next >

3. The Great Whore who Is Seated on Many Waters St. John is the one who briefly visualized the lump of desires. Although I e been a Presbyterian since I was a child, I e never fully read the Book of Revelation, because his gloomy futuristic ideas always make me feel so scared. I assume that the reason why he wrote this book is that he had the desire to control people by terrifying them. Although in some way I just insulted him, I believe that John really caught a glimpse of the future whether his intention about writing the book was impurely ambitious or not. This is one of the evidences of his great insight: The one of the seven angels who had the seven bowls came and said to me, come, I will show you the judgment of the great whore who is seated on many waters, with whom the kings of the earth have committed fornication, and with the wine of whose fornication the inhabitants of the earth have became drunk, so he carried me away in the spirit into a wilderness, and I saw a woman sitting on a scarlet beast that was full of blasphemous names, and it had seven heads and ten horns. The woman was clothed in purple and scarlet, and adorned with gold and jewels and pearls, holding in her hand a golden cup full of abominations and the impurities of her fornications; and on her forehead was written a name, a mystery: Babylon the great, mother of whores and of earth abominations. And I saw that the woman was drunk with the blood of the saints and the blood of the witnesses to Jesus. The great whore whom St. John saw is a goddess of desires. Seated on many waters and the scarlet beast, she achieves the desires of love, death and gluttony at once. She reminds me not only of Eve, the mother of all desire, but also Dal-gi of the Wine-Lake and the Meat-Forest. Sitting on many waters (the Wine-Lake), holding in her hand a golden cup, with the wine of her fornication, she made the inhabitants of the earth become drunk. As Dal-gi killed whoever had given Zhou truly loyal counsel, the great whore (kills the saints and the witnesses of Jesus and) drank their blood. St. John accurately saw the future. There is nothing wrong his words, because my parents and I go to church every weekend and reenact the exact same things that the great whore did.